I was lucky enough (semi) recently to make another adventure to the surreal land that is Kalalau Valley on Kaua’i’s Na Pali Coast. However, this time was a bit different. Hiking in for the first time and testing what the body is capable of. I’ve always been leary of the hike. As I knew, no matter what, the camera gear was going to add a significant amount of weight to a packed bag. That added to the length (11.5 miles from parking lot to campsite) and the infamous “crawlers ledge” had always deterred me. Well, this time there was no turning back. Plans were put in motion to hike in and with the lack of traffic on island currently because of the obvious pandemic reasons, permits were readily available last minute.

The decision was made to only take 2 lenses, my camera body and the tripod in addition to camping supplies, food, (very limited) clothing and couple odds and ends. Trying to keep the pack weight as ‘low’ as possible. However, this meant upon leaving there was easily 50+lbs on my back. Lets GOOOOOO!

Making the way up the trail the body was quick to pick up that this was not an ordinary hike. Not only was I carrying potentially the heaviest pack I had ever tried, (one equal one perhaps in 2004 to ski Tuckerman’s Ravine in NH…when I was much younger), but I was also attempting the longest hike I had ever been on. Getting a bit of a late start meant hiking through the midday sun. But onward we go. I will say, there is a meditative cadence to excessive physical effort with such hikes. The focus on foot placement….the sounds of the trail…and of course, the views, lend themselves to a full sensory experience. 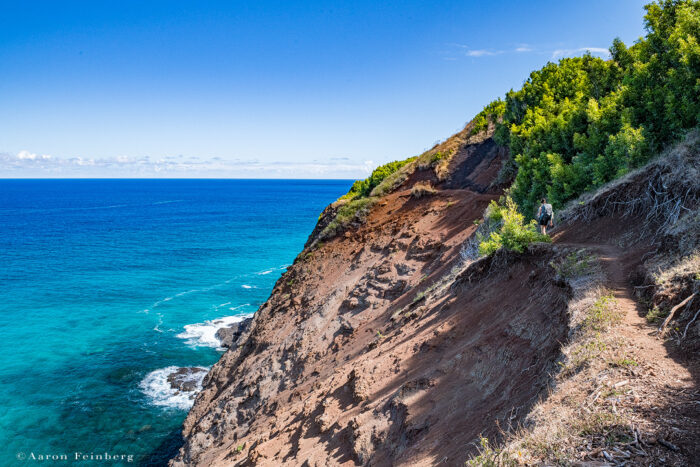 One of the few perks of leaving so late was that we arrived at the top of “red hill” (the iconic 800′ or so hill that guards the entry (and exit) to The Valley) just as the sun was nearing the horizon. Sunset arrival was glorious. This was also the final decent for the day and our bodies were ready to stop walking. The renewed energy shot through the legs and down we went. To the forest, then river, then finally our perfect campsite and then the waterfall. Whew. 7 hours from trailhead to campsite and 11.8 miles. Ibuprofen was on the menu for dinner that night.

Given that we had ‘only’ 2 full days to BE in Kalalau there was not much time to rest, even though the only thought that first night was…I wonder how this is gonna feel tomorrow??. Oddly enough, while tired, our legs werent too sore and being there is much to explore, after a slow and relaxing morning on the beach in what has to be one of the most unreal places on earth, off we went through the forest to Big Pools. A snaking ancient (or at least feels to be that way) trail up the forest, through Hau bush, lush fluffy forest and finally an epic set of waterfalls and pools roughly 2 miles up the valley. Relaxation was on the menu as well as some photography of course, where I reshot a composition I had taken earlier this year (which I am quite happy with as well). Then it was time to race the sun back to camp. While our timing was a bit off we decided to spend sunset from Mars hill and enjoy the bit of color and cool breeze before making it back to camp. Another 5 miles of hiking in the books. 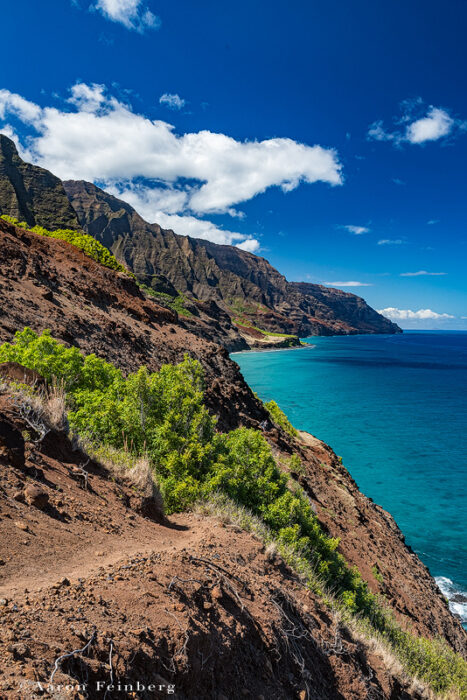 Day 3 was when the acknowledgement of the legs started to take place. While not overly sore to walk, to the touch it was apparent there was not much rest going on. But again, it was off on another adventure day, albeit after a nice and relaxing start to the day. Up through a less obvious trail that ascends on the other side of the valley. This one in contradiction to the day prior, with a much drier and autumn like feel. Considering the time of year it could almost be a fall hike in another part of the world…but then realizing it was still 82F and the leaves strewn about the ground and brown/red/sienna color palette were seemingly an aborition to another time and place. Onwards we went up to Convict and Ginger Pools. More amazing nooks buried within this amazing Valley. This time however we did not overstay as we knew what awaited us the following day. Arriving back at camp another 4ish miles in the books. Admittedly the daunting task of the next day very much on the mind. Did we go too hard and not rest enough? How was the body going to handle another 11.5 mile day with that weight? Our dinners finished timely and off to bed at the earliest time I could remember laying down at. We were at least going to be rested as much as we could. 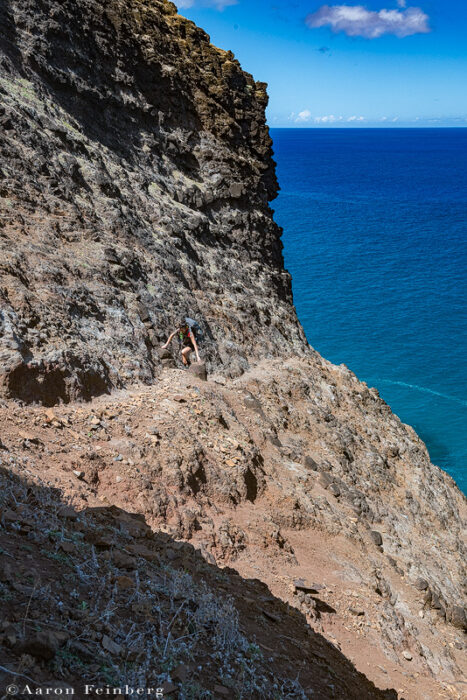 Time to get moving…645am alarm. Eat, pack and a quick toss of the frisbee underneath the iconic cathedral peeks. Reaching down to grab the pack that familiar feeling from 3 days prior shot back. Only this time the legs werent as fresh. While not as heavy as entry due to the lack of food weight, the legs were aware it was going to be a fun day. Off we went, 9am on the dot and one turn over the shoulder to say goodbye mentally one last time to our beachside home for the last 3 nights. The plan on this day was to leave a bit earlier to allow for more photography along the way back as I did not shoot any photographs until Red Hill on the way in. Figuring in that we were tired the calculation was 7.5hrs to hike. Knowing what we were up against the mental gymnastics begins early on as the decent in to Kalalau a few days prior at sunset turns in to an epic grind to start the day. Ok legs…this is your job today. Dont let me down. Surprisingly, while aware of the fatigue the body wants to crush on. And we walk…and walk…and walk. This time with opposite views, both in direction and light. The cool (for Kaua’i standards) morning air in the shadows along the trail a welcome reprieve from the blasting sun baking off the red dirt that was to come later in the day. 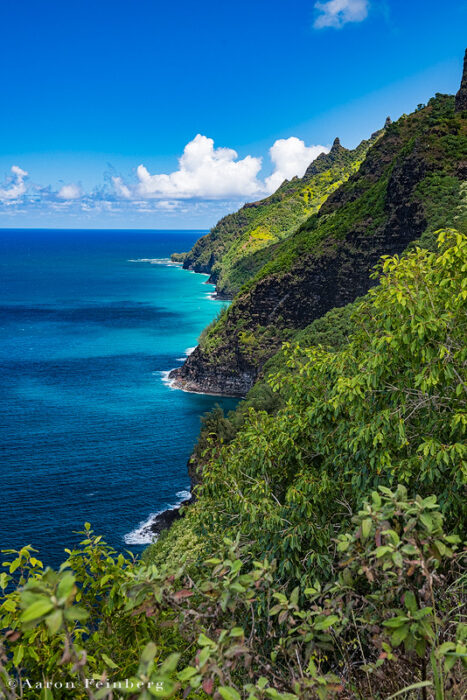 I’m impressed at our pace and even with stopping for photos to capture the Crawlers Ledge and other views, before we know it we reach the ‘half’ (not really half) way point of Hanakoa Valley. At this point we know the sketchiest terrain is behind us, however the most amount of elevation gain (and loss) lies ahead of us. But down the home stretch. This time a deep meditative focus comes over me as we wind our way through verdant valleys, across streams and finally up to Space Rock, the highest point on the entire Kalalau Trail. From here we know it’s a decently steep decent to Hanakapi’ai Valley and then the grueling climb up. But the mileage counter is down to 3 and we’re on it. As expected the climb out of Hanakapi’ai is brutal. Mid-afternoon sun. Dirt trail with no shade to speak of for long stretches of time. Hot wind wafts around us as our pace slows drastically. But we know the finish line is coming. The thought of jumping in the ocean at Ke’e and pizza await.

And just as it all started, we’re back at the same trailhead again. Cars. People. Civilization. Almost a mini culture shock even being gone only 3 nights. We stick out among the decent size weekend crowd enjoying a picture perfect Ke’e Sunday afternoon. Walking on to the sand with our packs, shoes and socks on, quickly removing everything as fast as we can and then that sweet relief of the late September Pacific Ocean. Magic.

Having experienced The Valley before in different ways, I will say that the hike is most certainly a pilgrimage. A lesson in what our bodies can do and a mental exercise that feels like a deep meditation. Sure there are less physically demanding ways to explore Kalalau but nothing will be quite the same as packing up a bag and experiencing the journey that the Kalalau Trail has to offer for the soul.

6 thoughts on “Kalalau – 33 miles of adventure”